Skip to content
We are proud to announce the release of seven new books in The New Bizarro Author Series!
The NBAS is a series of first books by first time authors. Eraserhead Press publishes a new batch annually each Fall, and the series is now in its fifth year. Over this time the series has gives us an opportunity to introduce you to new writers, and to introduce them into the world of being an author. Throughout the next year, we’ll be watching readers’ response to these books to determine if these will be authors that we’ll want to continue working with in the future. Over the past five years it’s been a lot of fun to see the reaction to the books in the series, because we are taking a risk with new writers that you’ve never heard of before and we get to see if they have what it takes to win you over. From this series, some of the strongest voices in Bizarro Fiction have emerged over the years such as Patrick Wensink who went on to write Broken Piano for President, last year’s best seller on Lazy Fascist Press, Steve Lowe whose new book You Are Sloth! just came out and Kirsten Alene  whose latest book Japan Conquers the Galaxy has been a hit amongst fans. Thank you for taking a chance on these new writers and supporting this series. We hope that you will enjoy this year’s offerings as much as we do.

The world is rotting away. Bodies are melting, buildings dissolving and it’s only a matter of time before the world completely disintegrates.

Despite the world rotting away, lovers Isobel and Dresden are fighting for the future, and their wedding day. Unfortunately, the rotting world isn’t their only challenge. Dresden’s mother is a wealthy woman with powerful secrets who wants only the best wife for Dresden, and Isobel isn’t it.

Dresden’s mother has him kidnapped and held hostage so he’ll not only miss his wedding, but alters him so he’ll survive the rotting world and live with her forever.

It’s up to Isobel to search the apocalyptic world for Dresden while he fights his mother’s mansion of horrors. If luck is on their side, Isobel and Dresden may be able to find one another before the world completely disappears.

Tom Clay is an average American guy–he’s a school teacher with a normal life, a wonderful wife and kid.

Until the day the mysterious Mondo Vixens bust down his door. There’s punk vixens, bikini vixens, devil vixens, clown vixens, preppie vixens, pirate vixens and a sadistic nurse vixen. They whip out the cat ‘o nine tails, torture Tom for mysterious reasons and kidnap his wife — brainwashing her into joining the vixens.

Dying and with only hours to live, Tom enlists the help of a rogue vixen to go on one last bloody rampage, destroying any vixen that gets in his way. He’s going to avenge his family, rescue his wife, and solve the mystery of the mondo vixen massacre. 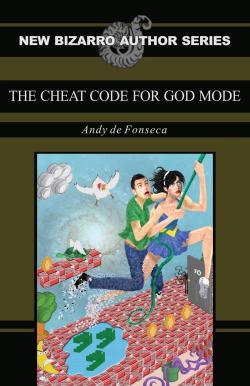 The Cheat Code for God Mode by Andy de Fonseca

In a world where humanoid bulls patrol the street, wormholes and portals make up children’s playgrounds, and flying turtles produce the most delicious bacon, Margy Plum and Victor Vance are quite content with playing old school video games and designing 8-bit chickens. When they find a cheat code to a strange game called Adamina, neither are prepared to see their video game exploits on the streets of their own town. To their horror, they have discovered a game that controls the universe.

While there, they discover a secret. A secret that twists all they know and believe, one that threatens their entire existence. It’s up to Victor and Margy, controlling the fate of everything and everyone, to find the equation at the heart of the universe before they’re ripped from their lives.

Babes in Gangland by Bix Skahill

No Woman Could Change His Ways, Only His Diaper…

When Marrowburg’s most fearsome gangster, Kid Phoenix, gets gunned down behind Stripping Through History (a titty bar that combines nudity with feminist history), there is a silver lining: he gets a second chance at life. Coming back as Baby Jaydon, whose perpetual five o’clock shadow and penchant for swearing aren’t going to win him any friends on the playground, he’s adopted by a well-to-do family and goes to live in the suburbs with no memory of his former life. But after a chance run-in with his ex-henchman, Ram Bountybar, Baby Jaydon begins to recall fragments of his former underworld life. He forsakes his quiet existence of building blocks and afternoon naps to find out who put five slugs in his back behind Stripping Through History. With the help of Ram and Kid’s former moll, Ruby Redd, who’s now a nun, Baby Jaydon goes on a dangerous journey through Marrowburg’s twisted underworld to find out who killed him. Blood and formula flow as Baby Jaydon, Ram, and Ruby Redd encounter onion and chive-scented mobsters, rabid ocelots, and the world’s angriest travel agent.

Trains turn into giant centipedes, citizens must cross busy roads by jumping across the tops of moving cars, and vehicles levitate over the city, shooting electricity at the people below. It’s up to Jimmy Toledo, Chuck E. Cheese employee and former gaming prodigy, to fight back against the games. But first he must overcome his crippling social anxiety, the crushing memory of his past failures, and his worthlessness as a human being.

Does Jimmy have the skillz to save the girl from the Donkey Kong game and reach the final level-the kill screen?

Martha is just like any other granny–she wears shawls, rides a scooter, likes a nice lunch after church (thank you Jesus!), and she loves the Supermall almost as much as she loves her family.

Until the day her entire beloved family is slain by bloodthirsty school teachers when her grandson loses the crucial championship basketball game. Martha is left for dead, and with nothing left to live for.

But unlike other grannies, Martha’s not going to take this massacre lying down! With the help of the Mascots, a race of living sports mascots, Martha trains to become vengeance on her family’s murderers. Whether this means slaughtering cheerleaders, raping the principle, or giving truck drivers a bit of road head, Martha’s ready to do whatever it takes to go Grambo!

The Church of TV as God by Daniel Vlasaty
Graveyard shift at the appliance cemetery wouldn’t be so rough on Jeremy if his head wasn’t turning into a television. Having his head turn into a TV might not be so bad if there wasn’t a fanatical cult out to kidnap him and force him to father their savior. Luckily for Jeremy, he’s got a talking dog with an attitude and a very pregnant sexy cult member on his side as he fights back against The Church of TV as God.