Today marks the anniversary of Cameron C. Pierce  working with Eraserhead Press. As a happy anniversary and thank you to Cameron, I would like to tell you a little about this hard working ,eccentric, charming, mad hatter of publishing.

I met Cameron at the World Horror Convention 2006 in San Francisco when he was just 17 years old.  That weekend we became friends and I got him drunk on my homebrew (though I didn’t know at the time he was underage).  We released his first novel, Shark Hunting in Paradise Garden, in 2008. Then, a year after signing his book contract, Cameron began an internship with Eraserhead Press while he was still a student at Evergreen College.  Two years later, we are releasing his fifth book and he has become the editor of Lazy Fascist Press an imprint of Eraserhead Press which he created.

Cameron is one of the most interesting, intelligent, caring and dedicated people you will ever meet. When he is not writing (which is what he does most of the time) he is editing other people’s work, sometimes even reading their novels aloud to them over the phone. He is passionate about everything he does and he has a rare imagination which knows no boundaries.

Some of the more eccentric things that Cameron has accomplished include

throwing vienna sausages at the ceiling of the Seattle Center while humping a giant tinfoil centipede with a fish head for a heart, attacking a squid with a vacuum cleaner, convincing an audience to throw raw meat at each other, french kissing a fish, a writing marathon in a voodoo themed donut shop, pickling copies his books in custom made brine as special limited editions for fans, and tearing apart the pages of his book – handing each one to a person in a crowd to create a symphonic live reading of the entire novel simultaneously. And in February, Cameron married fellow Bizarro author Kirsten Alene after proposing to her while wearing a banana costume during a performance art piece at BizarroCon. 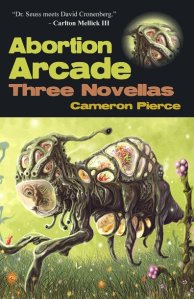