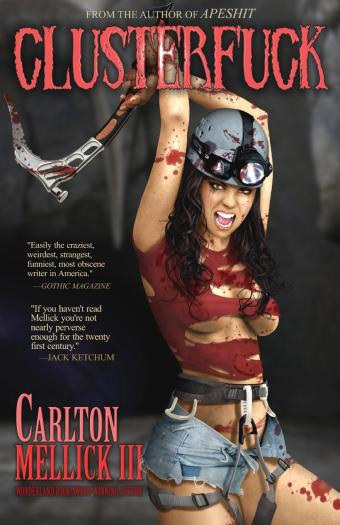 A bunch of douchebag frat boys get trapped in a cave with subterranean cannibal mutants and try to survive not by using their wits but by following the bro code . . .

From master of bizarro fiction Carlton Mellick III, author of the international cult hits Satan Burger and Adolf in Wonderland, comes a violent and hilarious B movie in book form. Set in the same woods as Mellick’s splatterpunk satire Apeshit, Clusterfuck follows Trent Chesterton, alpha bro, who has come up with what he thinks is a flawless plan to get laid. He invites three hot chicks and his three best bros on a weekend of extreme cave diving in a remote area known as Turtle Mountain, hoping to impress the ladies with his expert caving skills.

But things don’t quite go as Trent planned. For starters, only one of the three chicks turns out to be remotely hot and she has no interest in him for some inexplicable reason. Then he ends up looking like a total dumbass when everyone learns he’s never actually gone caving in his entire life. And to top it all off, he’s the one to get blamed once they find themselves lost and trapped deep underground with no way to turn back and no possible chance of rescue. What’s a bro to do? Sure he could win some points if he actually tried to save the ladies from the family of unkillable subterranean cannibal mutants hunting them for their flesh, but fuck that. No slam piece is worth that amount of effort. He’d much rather just use them as bait so that he can save himself.

It’s Tucker Max versus The Descent in this gore-filled comedy for the camp horror fan.

All machines suddenly come to life for some reason and go on a rampage to kill every human being on the planet. It’s kind of like that movie Maximum Overdrive, only ten time as fucking brutal!

Welcome to the Big Old Gaylord Opryland Resort! Do you lack the energy to get a date? Are you batshit insane and looking for a cure? Are you a pants-shitting senior who wants to stop being old? Do you hate Stephen King? Then, this weekend, there’s a seminar for you! Sure, there’s a comet flying through space bringing all machinery to life and killing everybody, but don’t worry about that! Here, have a sandwich! Visit our many attractions! See our massive convention center (of death), our beautiful atrium (of death), and our arcade (of death)! Ignore the massive senior citizen orgy. Don’t talk to the kid in the wheelchair. We guarantee the elevator will not transform you into a cyborg. Mr. Coffee isn’t trying to kill you. And there is absolutely nothing suspicious going on in the basement. (Don’t go down there though, seriously).

Take a load off, have a good time, and prepare to die!

Death Machines of Death is an apocalyptic horror comedy by Vince Kramer that just so happens to be a million times better than anything you’ve ever read before. And if you think for one minute that those boring literary classics like The Great Gatsby or Moby Dick are better than this, then you’re fucking stupid! 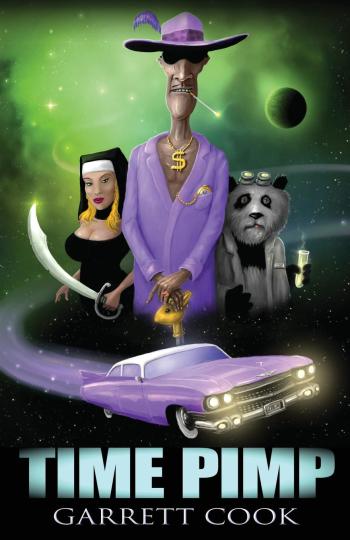