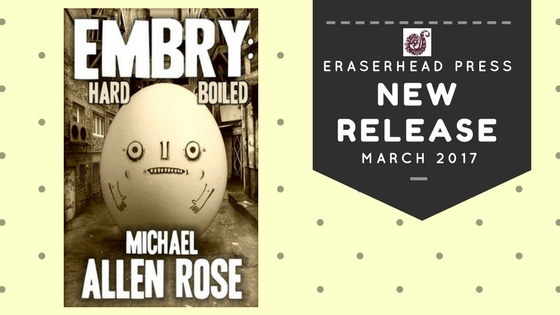 This spring, we are hatching a unique hard-boiled crime story by Michael Allen Rose, Embry: Hard-boiled.

A darkly comic noir about a chicken living in a world of anthropomorphic eggs who’s wanted for a murder he didn’t commit.

Life’s tough for an “embry.” Considered a vestigial organ at best and a parasite at worst, chicken embryos are usually aborted by the egg folk early in life. Once in a while one survives and slips through, hatching into an embry, an ostracized, lower caste anthropomorphic chicken. They have their own ghettos, and are barely tolerated by polite society. Our hero wakes up one day to find that some upstanding citizens have been scrambled. The king, his horses and his men are now after our hero for a crime he didn’t commit and proving his innocence is going to be nearly impossible. Thank goodness he’s armed with spurs, or the rotten eggs prowling the alleys of this strange grocery item city would fry him good. Delving deeper and deeper into the mystery, Embry uncovers his own bizarre background and finds he is hunted by a secret society who revere the most famous egg of all time, the very egg he himself emerged from during the great fall.

From the author of Boiled Americans and Party Wolves in My Skull comes a dystopian crime story that will have you asking: Which comes first, the chicken or egg?