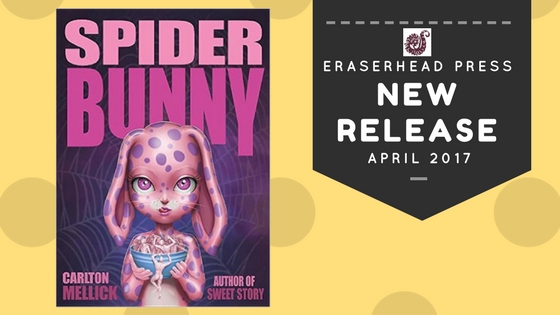 Carlton Mellick III, the godfather of bizarro fiction, is back with a tribute to the unintentionally terrifying children’s commercials of the ‘70s and ‘80s.

Only Petey remembers the Fruit Fun cereal commercials of the 1980s. He remembers how warped and disturbing they were. He remembers the lumpy-shaped cartoon children sitting around a breakfast table, eating puffy pink cereal brought to them by the distortedly animated mascot, Berry Bunny. The characters were creepier than the Sesame Street Humpty Dumpty, freakier than Mr. Noseybonk from the old BBC show Jigsaw. They used to give him nightmares as a child. Nightmares where Berry Bunny would reach out of the television and grab him, pulling him into her cereal bowl to be eaten by the demented cartoon children.

When Petey brings up Fruit Fun to his friends, none of them have any idea what he’s talking about. They’ve never heard of the cereal or seen the commercials before. And they’re not the only ones. Nobody has ever heard of it. There’s not even any information about Fruit Fun on google or wikipedia. At first, Petey thinks he’s going crazy. He wonders if all of those commercials were real or just false memories. But then he starts seeing them again. Berry Bunny appears on his television, promoting Fruit Fun cereal in her squeaky unsettling voice. And the next thing Petey knows, he and his friends are sucked into the cereal commercial and forced to survive in a surreal world populated by cartoon characters made flesh.

From the cult author of Cuddly Holocaust, Cannibals of Candyland, and I Knocked Up Satan’s Daughter, comes an absurd horror tale that pulls you in and never lets go.