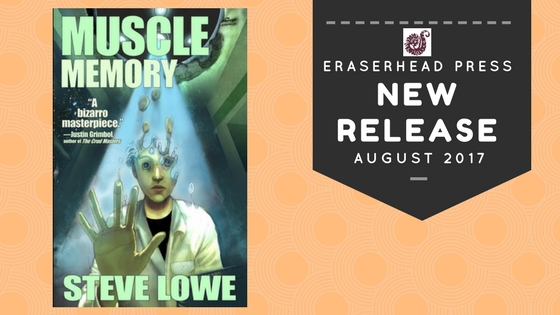 Loyal readers remember MUSCLE MEMORY as published through the New Bizarro Author Series several years back. This story has recently been receiving attention from a new audience and Steve Lowe has updated and expanded the story in this brand new edition!

“It’s always a risky proposition: to take a well-known trope (especially one that peaked in the films of the 80s) and try to find a new way to spin it. In Muscle Memory, Steve Lowe takes his cue from movies like Freaky Friday and Like Father, Like Son, presenting a tale of bodies switched and swapped all over a small community. Using some clever writing however, Lowe transcends the typical structure of those stories and takes it to a whole new level of absurd and hilarious wonder.”  —Michael Allen Rose, author of Embry: Hard-boiled

Billy Gillespie wakes up one morning to discover his junk is gone. In its place is his wife’s junk. Billy is now Tina, and Tina is probably dead. That’s because Billy’s dead. His lifeless body is still in bed and empty beer bottles and a container of antifreeze litter the kitchen counter. Did Tina really poison Billy? Can he and his neighbors, all experiencing their own bouts of body switcheroo, fix this before the Feds find Billy’s body? Was it aliens, or God, or the government? What was Edgar Winter really doing with his sheep? Is pro football Hall of Famer Terry Bradshaw the key to everything? What Would Kirk Cameron Do? In the expanded edition of this New Bizarro Author Series original, all will be revealed. Maybe.