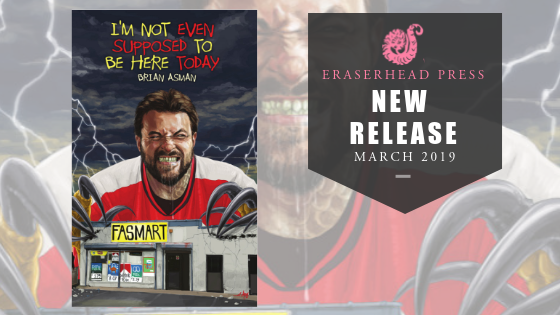 Did someone say kaiju Kevin Smith? Yes, yes we did! Get ready for a fun adventure from the first in this year’s lineup of New Bizarro Author Series books, I’M NOT EVEN SUPPOSED TO BE HERE TODAY by Brian Asman.

“Sometimes you stop by the convenience store for a slushy and the world just goes straight to hell, and takes you along with it. I haven’t had this much fun watching terrible stuff happen in a long time.” -Stephen Graham Jones, author of Mongrels

After a killer surf session, Scot Kring stops into his local Fasmart for a delicious, icy Slushpuppy. But before he can leave, a homeless guy outside has a stroke and accidentally recites an ancient Latin phrase that summons a very hungry demon, who just so happens to look like filmmaker Kevin Smith.

Now Scot’s stuck in a time loop along with the other occupants of the convenience store who may or may not be demonically possessed and he’s fighting back with nothing but a fistful of greasy hot dogs and a souvenir Slushpuppy cup as the giant menacing kaiju Kevin Smith threatens to kill them all.

I’m Not Even Supposed to Be Here Today is a demon apocalypse comedy for the slacker generation.

Buy the paperback on Amazon now! Also available on kindle.