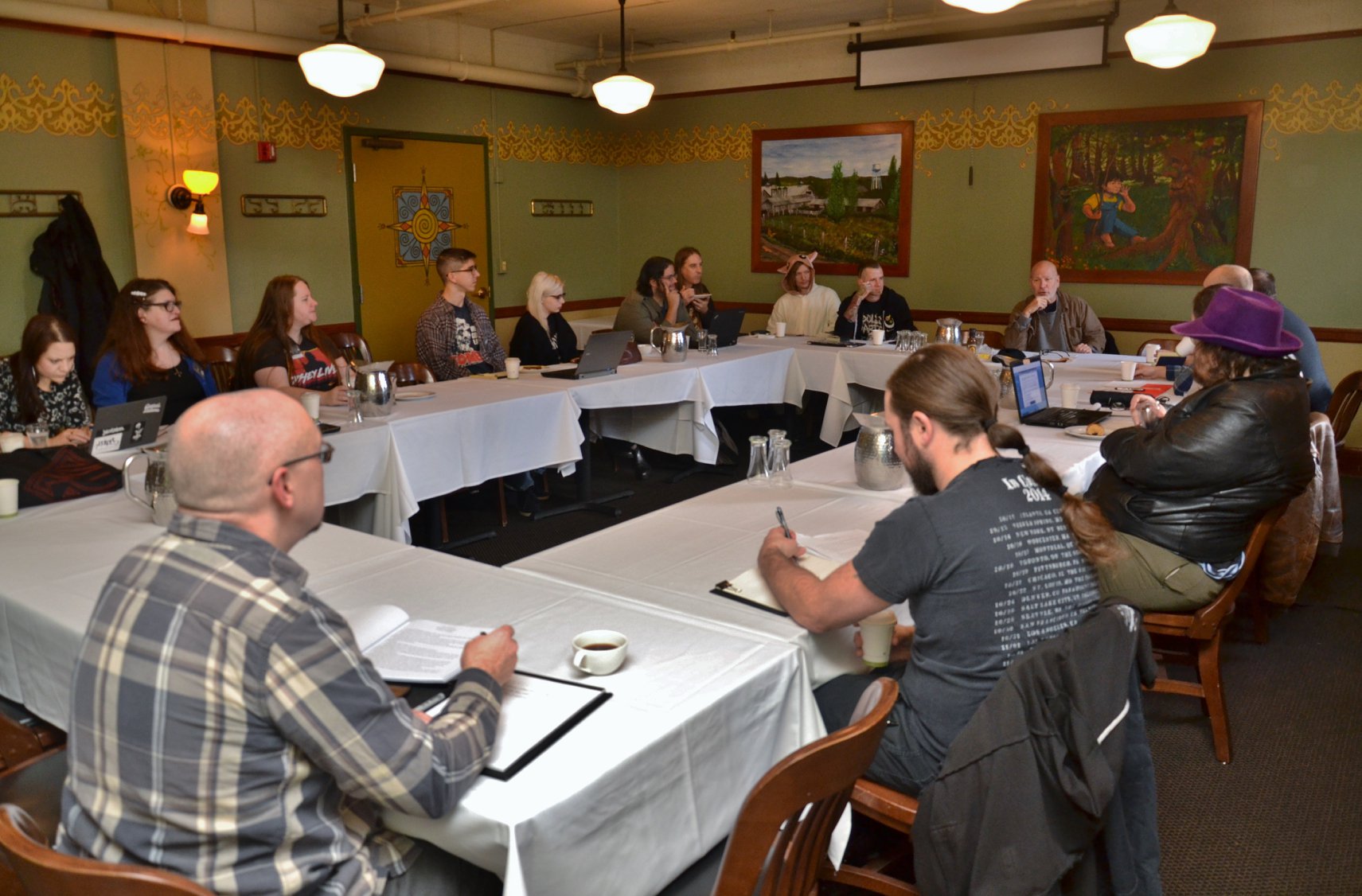 As announced on January 28, 2019, I have stepped down as coordinator of the Bizarro Writers Association. I will no longer host BWA meetings at BizarroCon, in Portland, or online, and I will no longer be responsible for coordinating the activities of the BWA. What this means is that the BWA needs new leadership in order to continue. I urge that a new Bizarro Writers Association be formed and run by writers.

Up until now, the BWA was a loose affiliation of writers, artists, publishers and editors whose mission has been to increase awareness of the bizarro fiction genre. I started the group in 2007 on the Mondo Bizarro message board (for all of you old-timers who remember) as a place for us to discuss the business side of the industry away from the public conversations which included readers and fans. From there, we started meeting up in person at different conventions around the country to enhance our support of each other’s work and to coordinate ways of expanding the genre. Our first annual meeting happened at BizarroCon #1 in 2008. And here we are 12 years later.

But for all this time, the BWA was never really an official thing, it was just a group of people with a little skin in the game, getting together (usually over drinks) sharing our experiences and making plans that would benefit the genre and the work we were producing. Anyone with an interest in the business side of things was welcome to call themselves a member and I personally reached out to individual writers, other editors, publishers, and artists who I thought would enjoy participating. Our DIY ethos has always been, “If you want to see something happen, you make it happen, and you find people along the way who want to help you.” So that’s exactly what we’ve been doing. All of us.

And you know what? We’ve been successful. Yes! Over the years we have increased awareness of the bizarro fiction genre. Our group has coordinated hundreds of events. We have inspired BWA gatherings in other parts of the world. We have reviewed, blurbed, and promoted each other’s work. We have provided education and mentorship to one another. We have also created lasting friendships, supported each other during personal times of difficulty, and laid the groundwork for a strong supportive community.

So why is it time for a new BWA? Because it is best for the genre. The needs of the creators have changed, the demands on the leader have evolved, and I am no longer able to fulfill that role. My involvement has always been one of facilitator, note taker, listener, and planner. As a publisher, I was accustomed to coordinating authors and managing projects. Since most of the people involved in the beginning were authors I was publishing, it was natural for me to coordinate us. But as we have grown, that has changed. It no longer makes sense for the publisher of Eraserhead Press to be leading the Bizarro Writers Association. It creates conflicts of interest and limitations. I’ve been challenged with making decisions between what is best for my company and what is best for other businesses. When a writer has a problem with Eraserhead Press (or any other publisher) there is no one else to hold the publishers accountable. People who have problems with me or my staff have felt shut out of the whole community. And the genre suffers. What the genre needs now is a Bizarro Writers Association that is run by writers (instead of a publisher), a legitimate professional organization with real authority, an association created not just to promote the authors and the genre but to protect them as well. Which is why it is time for me to step out of the way and allow room for it to grow.

There are a lot of exciting possibilities for the Bizarro Writers Association and its impact on the future of the bizarro genre. I believe we would all benefit from an official non-profit organization of writers and publishing professionals dedicated to promoting bizarro fiction and the interests of those who write it.

If you agree that it is time to take this community to the next level, the first step towards making it happen is to officially elect a President of the Bizarro Writers Association. The person will be responsible for its new form and for incorporating and ushering in its new Board of Directors.

If you think you have what it takes to become BWA president, keep in mind this will be a very important job that requires a high level of commitment. You will be responsible for the growth of the bizarro fiction genre and inspiring our movement to action. We need someone with a lot of drive, someone not afraid of hard work who is willing to sacrifice both time and energy for the betterment of the community. If you are only interested in this role for egotistical reasons (such as thinking it would be a good credit on your author bio), then you’re not the right person for the job. The right person is prepared to direct and motivate a team, possesses excellent communication and strategic decision-making skills and is efficient with conflict management and problem-solving. This is going to be a demanding and challenging role that requires someone who really cares about the genre and the authors in the community. What matters is that you have a passion to see creators of bizarro fiction succeed. Be prepared for hard work. Be prepared to inspire. Be prepared to give your all for your community.

I have faith in all of you to make the right decisions. I believe that the right person will emerge and be ready to take the reins. Given the events of the past few weeks, I’ve noticed a lot of you expressing your fear that this was going to spell the death of the genre. But I have to say, I personally believe this isn’t the end, this is just the beginning, and you are on the ground floor. If the right person steps forward, I believe the next twenty years will be even better than the last.