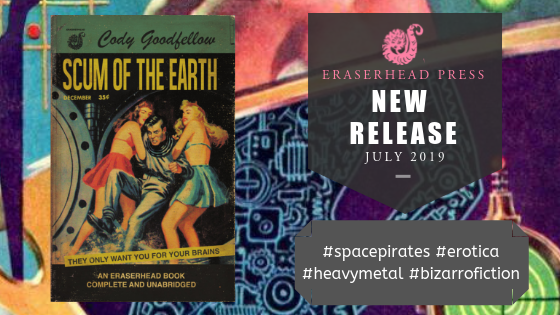 With summer in full swing we bring you the perfect bizarro beach read! SCUM OF THE EARTH by Cody Goodfellow is out in paperback and ebook today.

“In this fabulously unholy marriage of bizarro SF, crass sexuality, and tongue-in-cheek humor, Goodfellow (Sleazeland) successfully creates an interstellar pirate adventure that is anything but ordinary. Drugs are in high demand throughout the galaxies, and few things prove as addictive as the human imagination, which can easily be hijacked and downloaded. The Intergalactic Narcotic Enforcement Force destroys the Earth to halt imagination smuggling, and humankind is forced to scatter to the hidden corners of the universe, where cartels prey on them. Luckily for the human race, the trashiest crew in the galaxy and their nymphomaniac captain, Callista Chrome, are there to save them from being commoditized. Callista and the crew of the Barracuda are prepared to take on alien gangs, sex-crazed platypuses, and space vikings, even if they’re not sure the human race deserves it. A master class in the power of outlandish imagery and pulpy action, this otherworldly pirate crusade is sure to reel in SF fans who are ready to have their minds blown. ” — Publishers Weekly

THEY CAME TO RAID… THEY STAYED TO GET LAID!

For centuries, alien drug-runners plundered the Earth, harvesting organs and freebasing fear. Few drugs could match the potency of humanity’s dysfunctional two-stroke brains, so the Intergalactic Enforcement Force burned it down.

Now, the last scattered, ragtag pockets of humanity strewn across a hundred backwater worlds are the most sought-after cash crop in the universe, and their only hope lies in the unsteady, oversexed hands of a pirate crew of intergalactic trash under the command of a devious cutthroat nymphomaniac known as Callista Chrome.

But to save the unworthy human race, Callista and her drug-hungry horde will have to go through conniving alien cartels, buzzkill narcs, priapic platypuses, polymorphic ex’s and bloodthirsty space-Vikings before facing the most devastating enemy in the worst place in the known universe… home.