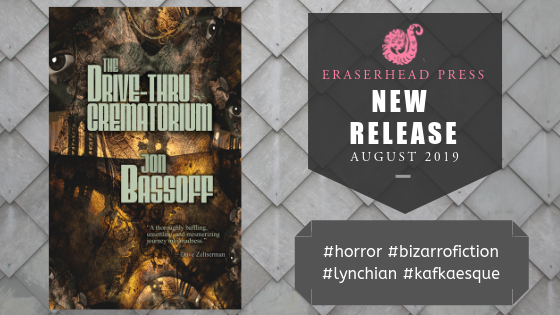 “Bassoff confronts directly the traumatic stress disorder of our world today and tears off its mask, even if the face must follow.”—New York Magazine

Happy August! This month we are very excited to present THE DRIVE-THRU CREMATORIUM by Jon Bassoff, a dark, absurd, unsettling tale about the monsters within us.

“Toss Kafka, David Lynch, and a pinch of Flannery O’Connor in a blender and you just might end up with The Drive-Thru Crematorium. A thoroughly baffling, unsettling, and mesmerizing journey into madness.” —Dave Zeltserman, author of Everybody Lies in Hell

Stanley Maddox lives a mundane life in a nondescript town. His wife is cheating on him, his colleagues at work don’t recognize him, and he has recently noticed a mysterious creature darting its way through his house. When he notices a flap of skin on his face, he begins pulling. Beneath his skin lies another person, an evil person, with the power to change his life forever.

“A Gordian knot of alienation and suburban discomfort. Nihilistic, weird, and ultimately, very funny.”—Danger Slater, author of I Will Rot Without You

“Jon Bassoff is the Kafka of Colorado, a writer who spins feverish nightmares out of the insane realities of modern life. Horrifying and hilarious, The Drive-Thru Crematorium is his darkest trip yet, the story of a mild-mannered nothing man who discovers the monster within. It’s a hell of a fun read, but it’s also the kind of book you find yourself thinking about days later.” —Jake Hinkson, winner of the Grand Prix de Litterature Policiere

“In The Drive-Thru Crematorium, Jon Bassoff twines the mundane and the absurd together in a dizzying spirograph to produce an angst-ridden picture of modern society. Bassoff’s novel is a shadowy feverdream in the best possible way—a story that both burns and chills and remains an unsettling thorn in the reader’s psyche, longer after the last page is turned.”—Steph Post, author of Miraculum