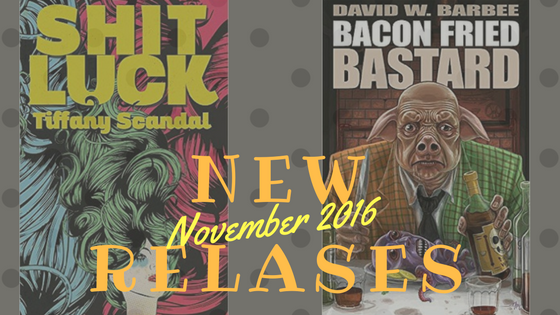 It’s getting on the most Bizarro time of year! November brings not only BizarroCon, the biggest gathering of Bizarro authors in the world but also brand new Bizarro books for the discriminating weirdo. This year, we have not just another book by Southern fried pulpmaster David W Barbee but also a bizarro dark comedy by skillful Tiffany Scandal! You could order them when they come out next week (Nov 18th) or, if you’re really excited (which you should be), you can preorder them now!

He was just another man with a drinking problem. Only, alcohol transformed this man into a beastly hulk named Piggly Swiggly. And since he’s always drunk, big and brutal Piggly has drowned his human half in a sea of booze.

After yet another rampaging bender, Piggly Swiggly awakes in a sprawling metropolis full of crocodile zeppelins, greasy bacon addicts, and worse: prohibition. Trapped in this strange tee-totaled town, he must keep his buzz going or else revert to his weak and vulnerable human form. But even then, Piggly Swiggly’s depraved existence may prove his undoing, especially when gangsters are plotting to cut off his snout, a pig-loving princess is looking to steal his heart, and he must face the worst torture of all…sobriety.

“One of the most exciting new voices to emerge in years. A deft, masterful mix of both bizarro and horror.”–Brian Keene, author of The Rising and Ghoul

Mondays suck. You get mugged, your car won’t start, you miss the bus, and your stylist burns a bald spot into your head. Suddenly you’re single and unemployed, and the only friend you have left is a cat. By Tuesday, you’ve been murdered. But death isn’t the end. You find yourself on an odyssey between weird worlds, reborn each time you die, stalked obsessively by the man who killed you.

Even in death, you just can’t seem to catch a break. Call it Mercury in retrograde, call it Murphy’s law, call it . . .SHIT LUCK

And of course,  bizarro fans know that November also brings something else to look forward to: The New Bizarro Author Series.  Every year,  Eraserhead Press seeks out the best new talent in bizarro fiction. This year, we bring you four wild, weird and unique new bizarro books for your reading pleasure and you can be the first kid on your block to own ’em!  The books don’t come out until the 17th but you can make sure you get them as soon as humanly possible. How? By preordering them now.

Hate from the Sky by Sean M Thompson

The Sky hates Kyle. He’s not sure exactly what he did to anger The Sky, but now, Kyle’s life is a nightmare. He loses his job, his girlfriend leaves him, not to mention he’s assaulted by hail, rain, flying condoms and anything the sky can possibly throw at him. Trees fall on his house, and hurricanes are sent after him. And that’s just the beginning. Enigmatic emissaries of The Sky come and lend their brand of aid, which only succeeds in sending Kyle on a journey into madness, crime, redemption, sexual indiscretions and despair. Can Kyle make peace with The Sky, or will the entire world always conspire against him?

How much longer can I live like this, if one can call this living?

The question haunts Bill Vine, an adipose junkie with a mean McRecycling habit, as he goes about the business of resupplying his dwindling stores of body fat. But then one day he has an intimate encounter with the deadly but alluring black goo and crosses over into the neo-reality of Tetraminion. In this new world, a degenerate species of enslaved mutants serve as the primary source for gringe, an unspeakable substance distributed by a faceless cabal known as The System. Intent on more than controlling the supply of gringe, The System will exploit Bill’s innermost secrets and fears.

A wolf with guitar strings. A turtle turned into drum. An alligator girl transformed into a synthesizer. A golden retriever converted into a theremin. These animals are the lifeblood of prog/noise group 2666. The beasts live in slavery until a sentient golden ax teaches them that they can be free. Their human masters are ruthless, cruel and desperate for fame but for these creatures, life and freedom is at stake. The instruments of 2666 will fight and die for it.