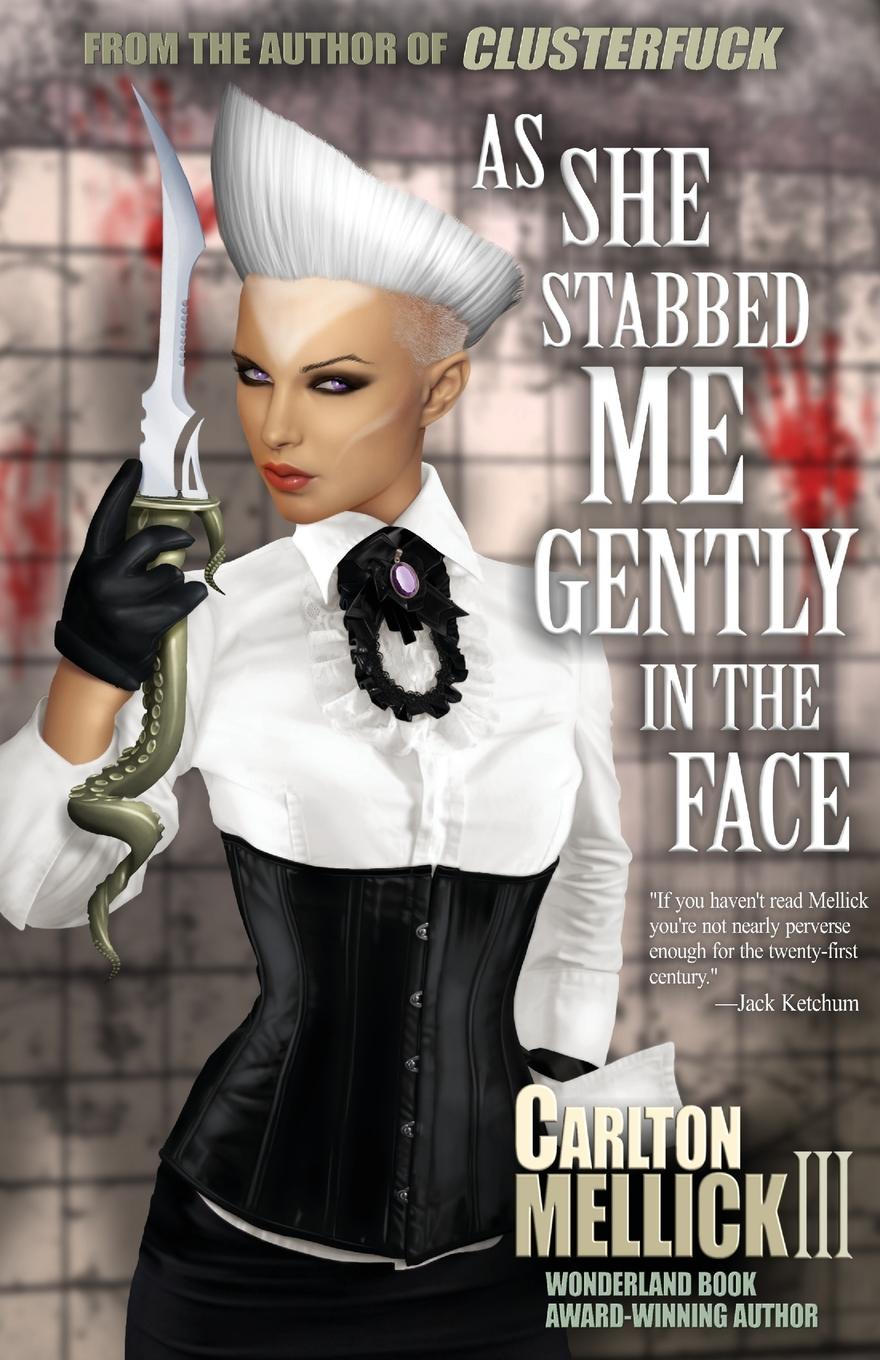 Oksana Maslovskiy is an award-winning artist, an internationally adored fashion model, and one of the most infamous serial killers this country has ever known. She enjoys murdering pretty young men with a nine-inch blade, cutting them open and admiring their delicate insides. It’s the only way she knows how to be intimate with another human being. But one day she meets a victim who cannot be killed. His name is Gabriel–a mysterious immortal being with a deep desire to save Oksana’s soul. He makes her a deal: if she promises to never kill another person again, he’ll become her eternal murder victim.

What at first seems like the perfect relationship for Oksana quickly devolves into a living nightmare when she discovers that Gabriel enjoys being killed by her just a little too much. He turns out to be obsessive, possessive, and paranoid that she might be murdering other men behind his back. And because he is unkillable, it’s not going to be easy for Oksana to get rid of him.

As She Stabbed Me Gently in the Face is a metaphor for a bad relationship, told in the form of a sociopathic killer’s affair with an even more sociopathic victim. From the mind of Wonderland Book Award winner Carlton Mellick III, author of Hungry Bug and Quicksand House, comes one of the strangest and most gruesome love stories ever put to print.

Presenting four novellas from bizarro author David W. Barbee, featuring electric werewolves, cyborg psychopaths, and a drunken ghost on a mission from God.
THE NIGHT’S NEON FANGS
On Christmas night, Buster Wade is cursed by the high voltage bite of an electric werewolf. With his life in shambles, he takes a job as the bodyguard for a grisly old miser looking to harness the bloodthirsty lightning coursing through his veins. Together, they travel a grotesque American monsterscape, sweeping up mummies that rain from the sky. Can Buster contain himself until he’s able to end his curse? Or will he sink his sizzling neon fangs into everyone around him?
NOAH’S ARKOPOLIS
Noah’s Ark never found land. The Lord God left him and all the animals alone on a planet of endless ocean. In the coming centuries, Noah’s simple boat became Arkopolis, a floating city where Noah’s human family and all the animals of the earth bred generations of mutant citizens. Now, that animal world is on the brink of war, and their only hope is the ghost of their righteous, noble, and falling-down-drunk founder, Noah.
THAT ULTIMO SUMBITCH
He roams the outback astride the meanest ostrich alive, a stone-cold killer with six-shooters for hands, on the hunt for wanted outlaws, reptiloid invaders, and scalp-hungry hippies. He has a name, but in this bionic, Bizarro western, they all call him that ultimo sumbitch.
BATCOP OUTTA HELL
All the people in Guano City are bats, and upholding the law are the crime-fighting batcops. But something is rotten in the caped crusaders’ ranks. A slain officer has returned from the pits of Hell to take revenge for his family’s unjust murder and rejoin the force. Now, the lovable misfits of Precinct 7 must help their fellow officer on his bloody rampage across Guano City, all for the glory of the Batdevil.

“Garrett Cook truly amazes me. His imagination is mind-blowing, his prose sings like the sweetest discombobulated sirens, and no matter how far out or strange his stories may get, he has the magical ability to make it all work.”
-Trent Zelazny, author of To Sleep Gently

“There’s no way to prepare, no way to protect yourself. Garrett Cook’s work has an edge…and it’s at your throat.”
-Robert Dunbar, Bram Stoker nominee, author of Martyrs and Monsters

“Garrett Cook and Jimmy Plush ain’t fluff. Raw and uncut, dealin’ out death to the offensive, they preach sledgehammer when they drop hardcore in hardboiled” -Joseph S. Pulver, Sr., Editor of A Season in Carcosa

“It is one thing to create a world. It is another thing to make it real. Cook’s impressive and highly ambitious novel does this admirably.” -Sean Keller, screenwriter Dario Argento’s Giallo

Featuring:
RE-MANCIPATOR
When zombie Abraham Lincolns start running amuck, John Wilkes Booth, Marilyn Monroe, and other greats from history must save the day!

DIESELPIG
The beloved Smiley the Pig is here to save us from the Catholic Church. And he’s brought a shit ton of guns!

BRIAN’S GIRL
A gorgeous woman arrives one day at a man’s door for anonymous sex. It’s not a dream come true- it’s the beginning of a cult that will change the world.